Gregangelo & Velocity Circus/Arts & Entertainment was delighted  to be featured as part of AMS Pictures "Home Strange Home" series for the HGTV network.
This is a candid and whirlwind 11.5 minute spin through the labyrinthine house, our headquarters (a journey which normally takes 2 hours).
Enjoy...

Posted by Gregangelo & Velocity Arts & Entertainment at 3:33 PM No comments:

Posted by Gregangelo & Velocity Arts & Entertainment at 4:30 PM No comments:

We are working on designing an installation for the Scottsdale Museum of Contemporary Art  for an event in May.
Our collaborators , Circus School of Arizona and Jeffrey Ferns are paving the way to bring our artistry to a new region.
Here are some images of a few CSA artists on site at the museum venue... 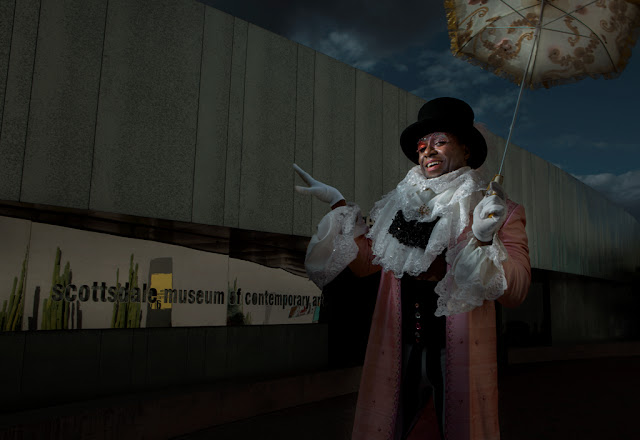 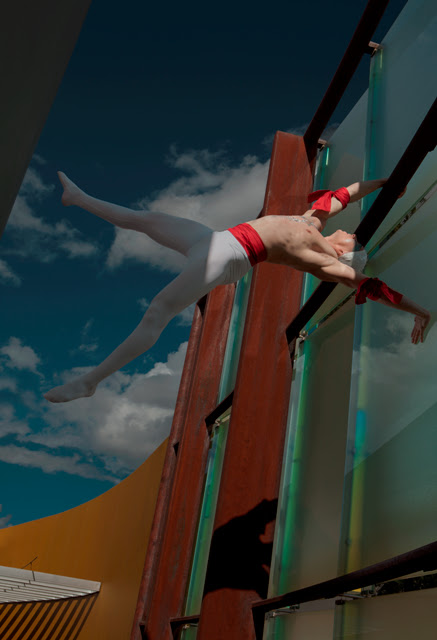 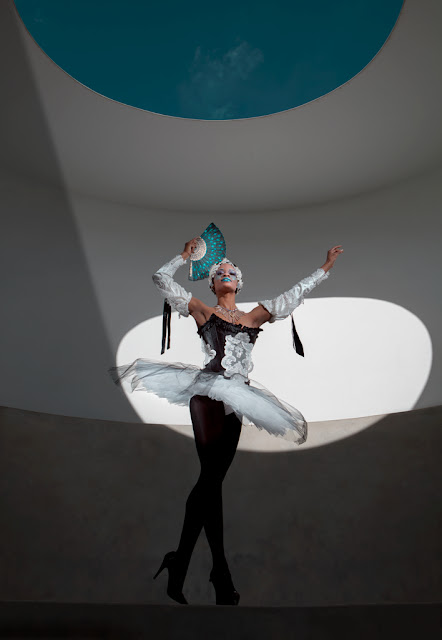 See promotional video for the event here: https://www.youtube.com/watch?v=1zVgP_0f9Xo
Look forward to sharing  a full gallery of the finished product early this summer.

Posted by Gregangelo & Velocity Arts & Entertainment at 4:34 PM No comments:

Tutankhamun and the Golden Age of the Pharaohs

Tutankhamun and the Golden Age of the Pharaohs 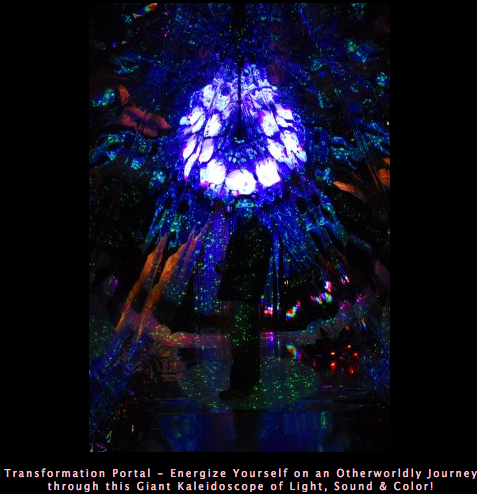 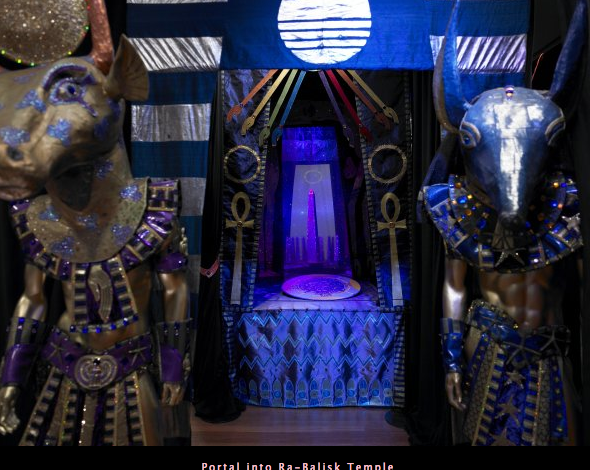 Gregangelo creates a multi-media theatrical adventure through a solar temple. Guests explore the mysterious inner sanctum of the temple which includes three dimensional dioramas, unexpected horizons, and dazzling special effects integrated into the interactive installations. The temple art is based primarily on ancient Egyptian icons, motifs, and symbols. Traditional iconography is interpreted with a contemporary sensibility, making “Ra-Balisk” not an ethnographic documentation of something that might have existed in the distant past, but rather a vibrant, living, sacred space that brings the ancient artistic spirit forward to the present and into the future… 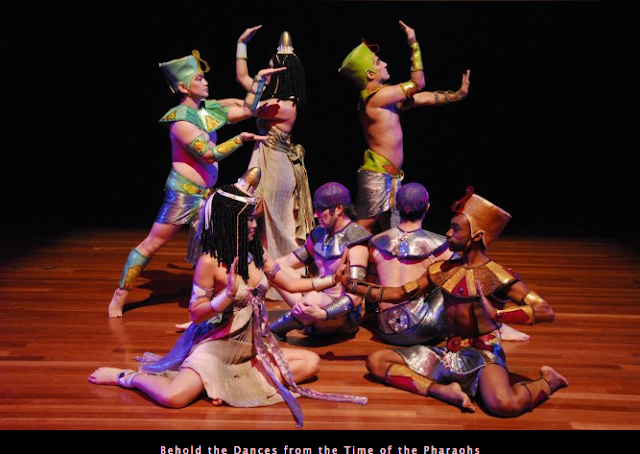 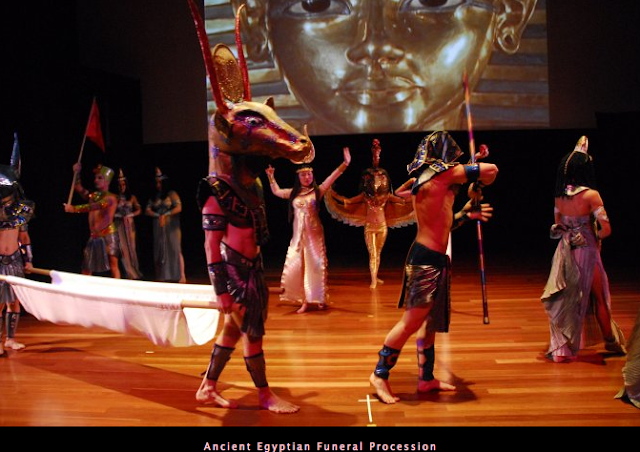 We also took the show to even larger venues 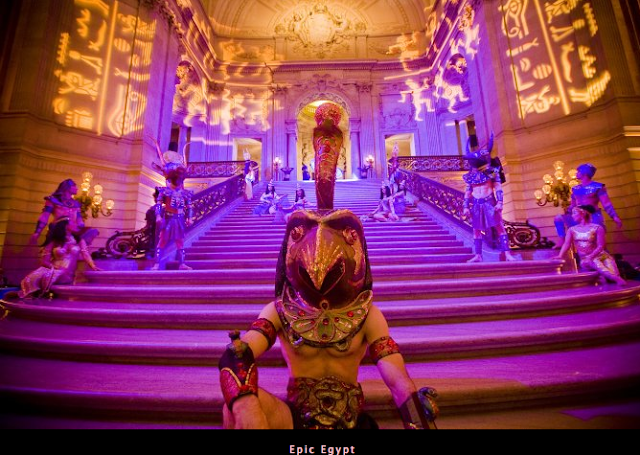 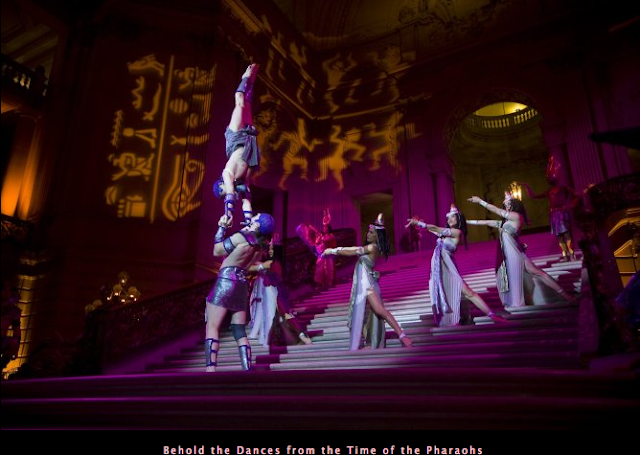 My  favorite jobs are working in tandem with museums to promote their exhibitions to the public.

Here is a challenging one we did in 3 parts in 3 days for the Nevada Museum of Art in Reno promoting an Ancient Egyptian exhibition tilted:To Live Forever 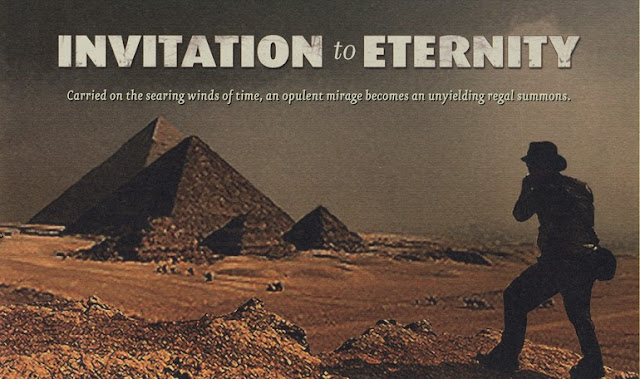 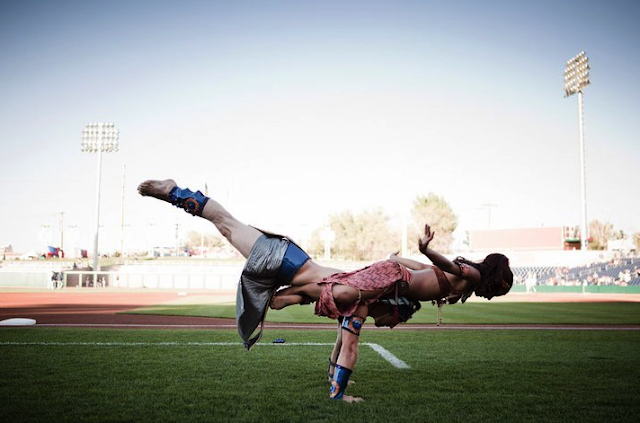 Velocity presented our signature Ancient Egyptian Adagio performance to an enthusiastic crowd of un-expecting baseball fans on the ballpark diamond. The performers later interacted throughout the park to peak the fans interest in attending a spectacle of a different sort…an art museum exhibition. The crossover challenge of bringing sports fans to the museum for the first time was a success!

see more photos at top of this page: http://gregangelo.com/entertainment/installations/nevada-museum/ 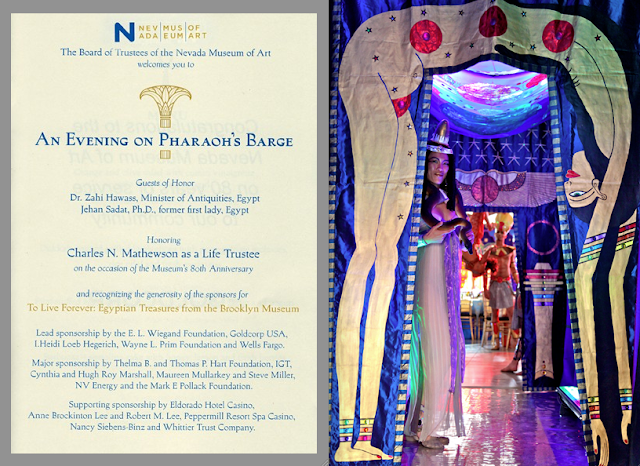 At sunset on the Nile’s royal fleet, nobles and scholars converged to talk of ancient mysteries.  Over an elegant dinner, the ancient and present were woven together by plans for the future, and performances inspired by the past.  Velocity Circus provided entertainment throughout the night which included Whirling Dervish, acrobats and more.  Guests included Egyptian Minister of Antiquities Dr. Zahi Hawass and educator, activist and former first lady of Egypt, Dr. Jehan Sadat. 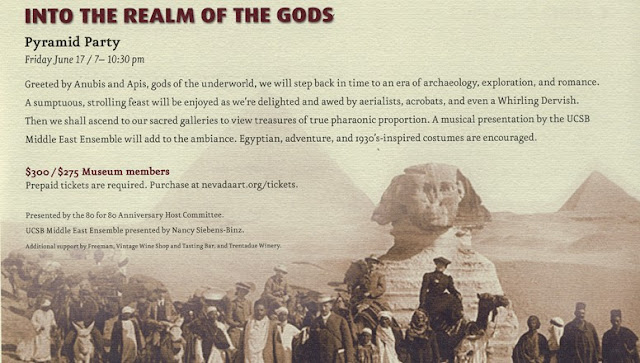 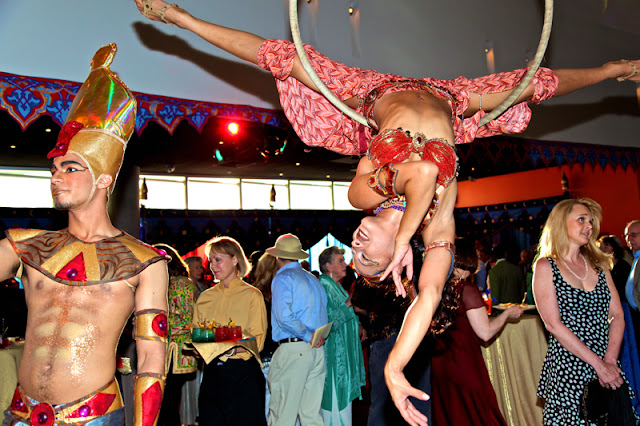 Even after a few millennia the hottest ticket in town is still ancient Egypt!  With processions to lead the crowd to jaw dropping Velocity performances and toe tapping, ear bending music by the University of California Santa Barbara’s Middle Eastern Ensemble, the party went all night long.   Museum sponsors, donors and long time enthusiasts were dressed the part of Pharaohs and Pharaoh queens which added to the playful enjoyment of the festivities. 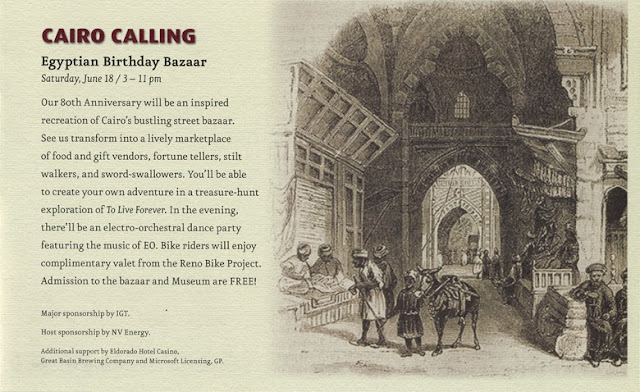 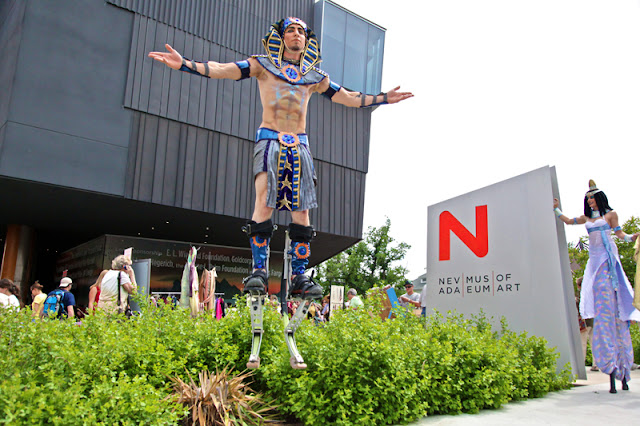 In celebration of the Nevada Museum of Art’s 80th year the gates swung open to let the people in!  Nearly six thousand people walked the rainbow hallway to meet the mummy, hunted for treasure in the exhibition “To Live Forever”, and smelled perfume from the Hanging Gardens of Babylon.  Spirits of generosity, revelry and community were overflowing at this awe inspiring journey through time and curiosity.   Highlights included  standing room only performances of Velocity’s Neo-Egyptian circus acts inspired by the exhibit, and a magical outdoor bazaar inspired by Egyptian markets of the past and present.

I am a Whirling Dervish 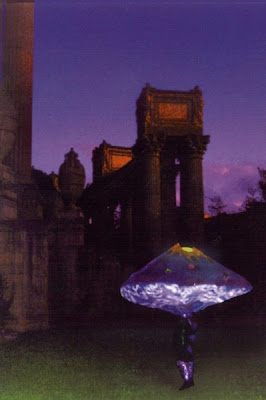 From the tiniest subatomic particles, to the most majestic of spiraling galaxies, all material elements of nature revolve. It is the first, and will be the last  story told by the universe...
Since the time of Ancient Egypt, mystic men – members of secret societies, harnessed this knowledge by ceremoniously whirling, imitating the spiraling structure of life and the cosmos. By spinning into a state of blissful euphoria, they transcended the physical limitations of gravity, their consciousness peaked,  their bodies  bridged earthly and heavenly  (or eternal ) spheres.
This ceremony of whirling resurfaced in 13th century Turkey where it was performed by dervishes, members of the mystic brotherhoods, who were often philosophers, poets and astronomers.
Combining these ancient concepts with his own interpretation, Gregangelo has been performing his uniquely  mystical adaptation of the whirling dervish for over two decades, dazzling and intriguing secular-audiences worldwide. His spectacular costumes represent the omnipresent realm of the cosmos and eternity. As he sheds layer by layer, the story morphs from the infinite expanse of the Universe to our galaxy, to our solar system, to Earth and finally to the individual.
More Whirling Dervish photos :
http://gregangelo.com/entertainment/characters/dervish/ 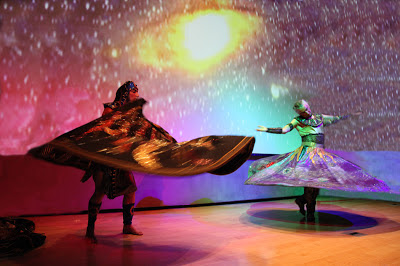 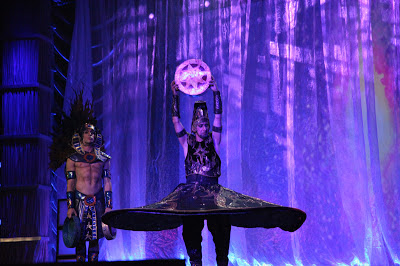 Just read a remarkable book titled "Proof of Heaven" http://www.lifebeyonddeath.net/node/15/done?sid=12023 and though I am no holy roller (just a roller skater), was motivated to send the author this message and invitation:

I am a whirling dervish and stumbled upon your very inspiring book/experience per chance at an airport, read it, pondered it, and as usual  intuitively found myself very familiar with the topic or... THE topic.
Though I have never experienced a NDE  (Clinical Near Death Experience) or any psychotropic induced state (other than the natural elated state of consciousness while whirling); since birth, I have never lost the firm memory  of eternity or as I refer to it, and noticed you occasionally did as well, -Reality. My entire life has been dedicated as an artist and entertainer to creating shows, stories, artistry, and installations for secular audiences based on "Eternity" (though sometimes masked in more accessible and sometimes even popular imagery depending on the audience) .
I have a permanent installation in San Francisco based on Eternity to which I extend an open invitation to you and your family to share together should you find yourself in this "City by the Bay" .The experience pushes the limited perception of our earthly eyes, ears and multiple senses to expand far beyond the horizons of perceived reality to that far more wondrous , yet always present realm of eternity...

Enthralled with your overall message of  Love, and hope that you inspire many, many people who are in need of seeing beyond the veil of mortality...

Posted by Gregangelo & Velocity Arts & Entertainment at 4:25 PM No comments: