I am a bit late, but with all of the hype over the realy wonderful new San Francisco/Oakland Bay Bridge, I was inspired to post this song written by Rita Abrams which personifies the bridge as "Mr Babe Bridge".  Rita wrote it for a show we did several years about San Francisco. It is sung by Darien Gray. Enjoy...

Posted by Gregangelo & Velocity Arts & Entertainment at 3:42 AM No comments:

I am honored to be part of the subject matter in Velocity Artist Ashley Gomez (singer/actor/ character) essay for her college level Creative Arts class. - Gregangelo


Perspectives Essay
Ashley Gomez
Creative Arts 176
March 3, 2013
Drawing from my own experiences in working with groups, I would agree with Piers Ibbotson’s statement:
If the right culture were in place, innovation would not be an issue; the function of managers would be like the function of the director of a good ensemble: merely to select from the stream of inventions and suggestions pouring from the group as it engages with the tasks they have at hand (p. 2).
Ibbotson suggests that in order to be a successful manager, it is important to listen to the group and gather different thoughts and ideas to fulfill its purpose.  I’ve worked in many different types of groups, for school projects, work, or organizing events, and in every situation there has always been a goal to be achieved and a leader to help organize the process. Since I have been reading Ibbotson’s, The Illusion of Leadership, I have become more aware of the leadership processes around and what makes them successful or not successful.
Many performing artists strive to make a decent living doing what they love, but they struggle to get a steady income.  Alone, they are unable to create a demand.  Gregangelo Herrera, the artistic director of the arts and entertainment company Velocity Circus has taken an approach, similar to the approach that Ibbotson writes about and that has better enabled a solution to be found for a problem.  I’ve been working with Velocity Circus for close to a year and I have recognized the qualities in the leadership that have driven this company to success.
Prior to founding Velocity Circus, Gregangelo performed around the world in Cirque Du Soleil as a Whirling Dervish.  Traditionally, Whirling Dervishes are men who are a part of a mystic brotherhood that spin around in long flowing skirts to represent the spinning of the cosmos.  Gregangelo took from this philosophy and started to think about how the motion of spinning is a part of everything that makes up the universe from the atoms to the way we live. He then began to think about this in terms of the art world.  From his perspective, artists today are consumed with achieving fame and fortune, obsessing with beauty and stardom, while battling one another for a spot at the top.  This is the exact never-ending unobtainable journey that is stripping away from their very soul, which is why artists should take a step back, look past these tropes, see that the universe is still spiraling around them, and realize that the true wealth is inside them.  They should come together and collaborate as a group and become stronger rather than competing against each other in an endless battle. Gregangelo and a team of other artists used this philosophy to create Velocity Circus. 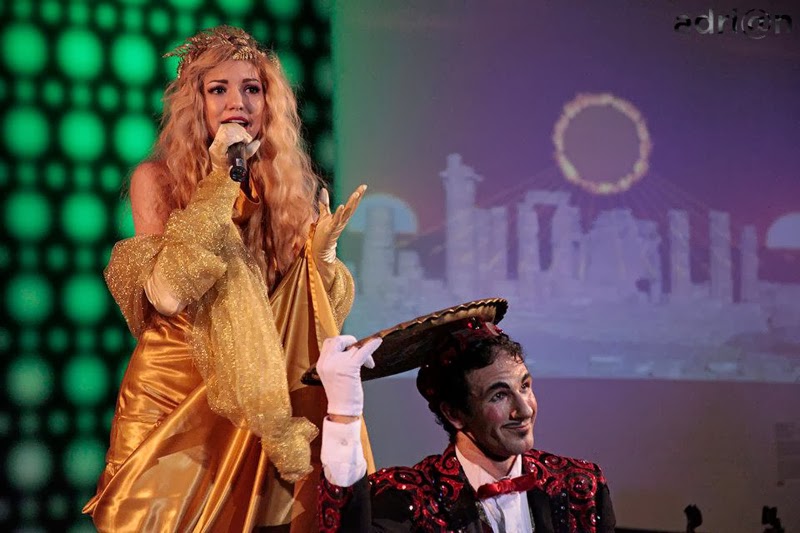 Instead of battling one another for a spot on the top, these artists come together to create something innovative and unique.  Building from the ground up, they started to design characters, sets, and gathered performers of all types. They collaborated to achieve the fantasies of their customers. When a challenging project came up, the artists found a way to bring it to life. This is exactly the type of leadership that Ibbotson writes about that drives a group to success.  Ever since I have been working with this company, I have been able to see a difference in myself as an artist.  I’m encouraged to come up with ideas and get my creative juices flowing.  Being in this type of environment motivates me to perform well and think outside the box.  If we succeed as a group, we succeed as a whole, which fulfills my artistic individuality as well. I believe I am an important asset in contributing, and since I feel that my input and ideas are valued, I give more of myself.

Gregangelo takes what the group has to offer and morphs it into a masterpiece. Because of this successful leadership, Velocity Circus has not only created a steady working environment to artists, but it has become a hot commodity that is in demand.  Museums and corporations seek Velocity Circus to bring even their own wildest ideas and fantasies to life. This encourages involvement from the client as well.  Gregangelo calls his team “Mission Impossible” because there is no project too difficult for the hundreds of artists who make up Velocity Circus.  Together, anything can happen.
Gregangelo’s philosophy has created the “right culture,” therefore allowing innovation to take place. His function as a leader has allowed several artists to come together and work as a team to build their ideas into elaborate works of art for others to enjoy. A good leader takes part in the group and listens to ideas. They admit mistakes and recognize efforts. Ibbotson’s statement hits it right on the nose. If you understand what it takes to be a leader, you’ll fulfill the team, which fulfills the client, which fulfills the goal, which fulfills the company.  This concept is the backbone of success.