The Seed of a Spark of a Glimmer

Imagination is the seed of all creativity, it lives inside every person on this earth inhabiting our thoughts and dreams. “The Seed of a Spark of a Glimmer” looks inside the thoughts of those bringing their creativity into the world through art or invention. Film maker Wade Ranson is spending 2013 traveling the world interviewing artists, musicians, writers and creatives of all walks of life to find the secrets of the creative mind. Where do our ideas come from, how can we touch the creative spark inside us and how it feels to live a creative life?

Keep in touch with this project here at www.theseedofasparkofaglimmer.com where I will add a short quote from my new interview subjects throughout the year. If you are a creative with a unique story to tell feel free to contact me at the email address below to discuss being a part of this film. The goal of this project is to inspire others to live more creative and happier lives. 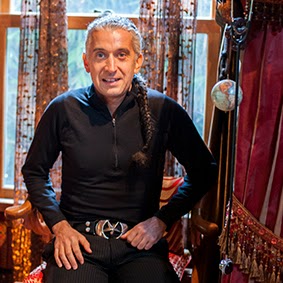 “I believe that creativity is innate in everyone. I’ve never witnessed a child not play, not imagine, not tell a magical story. For some reason people choose a different door…Usually the fiscal paths are what kill creativity more than anything.”Gregangelo, Performance Artist, San Francisco, U.S.A.
Posted by Gregangelo & Velocity Arts & Entertainment at 3:45 PM No comments:

Interview of Gregangelo by Will Clark, Masters Student at Berklee College of music for a Class project DECEMBER 2013

Will:
How did you get your start in production?

Gregangelo:
It happened accidentally and over a long period of time.
I started young as a performing artist with bit and novelty parts in high school musicals and than more as a visual artist grabbing every opportunity to make anything (usually pertaining to on stage scenery and costume) and than in ethnic dance where I developed a whirling dervish act (with much help) and that single act garnered allot of attention from audiences and other performing artists alike. I soon discovered circus and a whole new world opened. I had a fire in my being to push and develop my own limits and consequently soon attracted other equally dedicated artists.

Without knowing any conventional limits, and incorporating every skill I learned along my path, I soon began developing small shows with a mix of 7- 10 artists. I did the sales and negotiation of the shows, the book-keeping and finances, the “booking”, the casting, the music, the costumes, the lighting plots, both the direction and artistic direction, some choreography, the performing, the rigging, the artist management, the catering, the load in/out and often quadrupled myself in shows by performing a ground act, an aerial act as well as working as a percussionist while artistically directing the show simultaneously.  Needless to say, I learned from trying every aspect of everything and recovering from the inevitable failings by trying harder to succeed one project at a time on the way…and still am.

See talk on link below for more details: 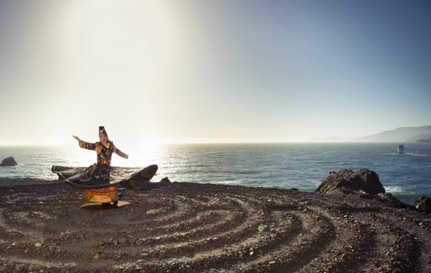 
Will:
Who are some of your major influences in what you do today?

Gregangelo:
There are so many.
First off my parents, who’s very simple advise when I decided early on to live as an artist was:
Go for it. Do not ever ask us or anyone for money. Do it honestly.
And I have lived by both rules. I never have received a dime for projects from grants, endowments, funds, family, etc. It has all been 100% earned income project to project. And the highest% of $ of every project goes to paying other artists and helping them in return to earn a viable living. It is this which has built my self-esteem and confidence the most, and has gradually grown me into, an otherwise unlikely, position of leadership.

Growing up in San Francisco, I watched and learned the nuts and bolts of business from select friend’s parents and my family who all owned, worked hard and ran small and growing businesses. I was driven by the will and inspiration of those who earned their way by doing what they liked and lived their purpose.

I was influenced by the achievements and mistakes (which I learned not to make; though I’ve made plenty of my own) of the multi-cultural proprietors who I worked for as a young man- a Japanese gallery owner, a Middle Eastern dance teacher/choreographer, an Australian caterer, an African American theater director, an Italian developer and an aspiring Polish business man/film maker, whose claim to fame is that he accidentally made the worst film ever.. And it is now an occult classic!!! It is amazing what you can achieve when you stick with it and adapt to the often unexpected results accordingly.

Many influences came from exceptional teachers and people who I did not really know, and from many folks who I met but did not care to know. Those people were the dreamers, the”some-dayers”  the idealists who never had the courage to take risks, or to work and push their limits and bring their dreams to conscience reality. I rebelled against them…and I suppose I still am. 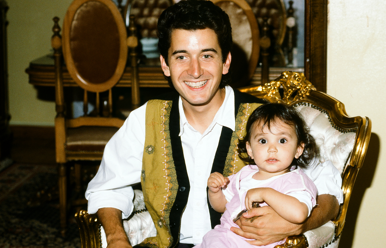 Gregangelo as a young man in Cairo, Egypt with his niece, Shiva
Will:
What do you think are some of your favorite installations you have done in your career?
Gregangelo:
There have been numerous, but by far, I am proudest of the peripheral museum installations we do surrounding and inspired by major museum exhibits which garner interest for their public programs. Collaborations with other artists and arts organizations are also most profoundly  memorable. See samples of my favorite rite here: 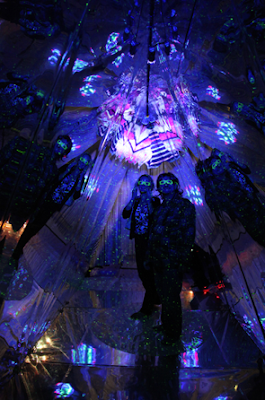 Of course, my home and studio dubbed by artists as “Circus Headquarters” and”The Gregangelo Museum” by visitors (I just call it “Home”) is the most permanent of them all and is in fact my “Installation Lab” and a continued transforming and evolving work and experience in progress. I share it with an interested public year round and as frequently as possible: 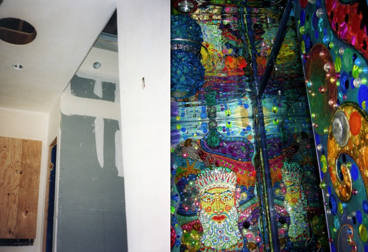 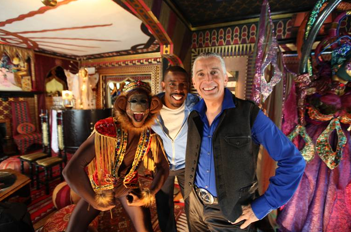 Will:
What are you working on now?

Gregangelo:
At this moment: Several intricate Installations, events, shows, characters and antics for clients such as Google, Gilead Sciences, Netsuite, Github and a gala following the RSA conference of internet security specialists/cryptologists and more (All varying concepts). They are all designed to entertain, inspire and honor the over-achieving employees of these leading innovative companies which are changing how the world lives and communicates. Each of our productions offers these innovators a new and un-familiar experience to store in their memories. 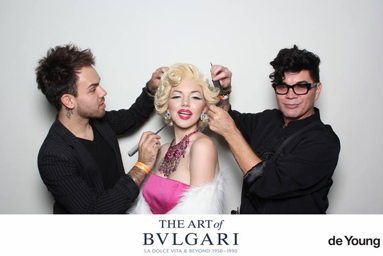 Consistent to the weather installation in gallery 4, Velocity Arts will create a fully immersive environment in galleries 1,2,&3 bringing all the elements of weather and the seasons together… with a twisted perception on how humans realize such environments.

The largest part of this install will be one gallery with a giant cloud video sculpture that morphs through the seasons as guests observe- aerialists suspended from the cloud combined with special effects will all be fused together. Autumn will be a gallery of contemporary still life paintings, which on second glance are actually food buffets into which the guests can reach beyond the frames and eat…and so on.
(No musicians will be cooked outdoors in the AZ blistering heat in the process)

On a lighter note, there is also a large private party for the 50th birthday of a local lady who likes to celebrate big. We are developing a plethora of characters, scripts, and antics which catapult you back into the decadent 1970’s experience at Studio 54...witness Cher, Mick Jagger and Liza Minnelli converse about the birthday lady, revealing her to the guests. My dear friend and favorite writer, Rita Abrams will be writing that script.
http://gregangelo.com/entertainment/personnel/rita-abrams/

There is also a small public “Banana Festival” for which we will producing an outdoor family show -Yes we have fallen into the agricultural harvest celebrations- what is better to celebrate than food, the sustenance of our existence! 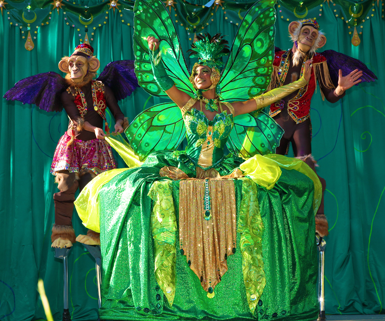 There are allot more, but these are what are foremost in my mind at the moment.
I always take great pride in our commissions and performances for entertainment giants. We have had major jobs in the past for Warner Brothers, Univision, etc. and I hope more opportunities to entertain for mega-entertainment companies come soon… 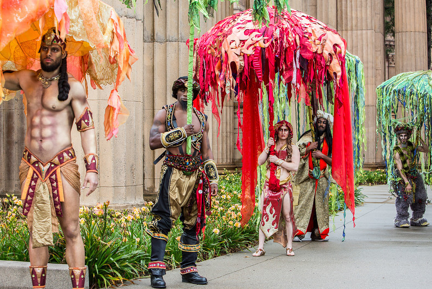 
Will:
What is it like collaborating with other artists in your field of work?

Gregangelo:
This is what I call living completely, pure joy, and has in fact become my life’s calling.
I could not achieve anything fully without the fantastic collaboration of both a steady crew of artists and technicians, as well as consistently bringing on and mentoring younger developing artists as well as pushing the limits of seasoned older artists- all who are 100% dedicated to making their way in this world as an artist, expressing themselves fully- and do, regardless of all obstacles. 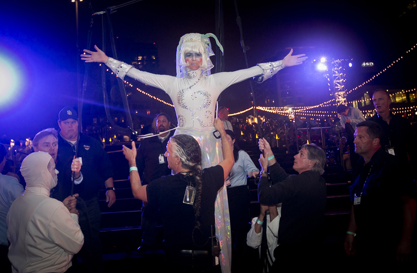 Gregangelo, directing and collaborating with 2 crews (from San Diego, CA and Tucson AZ) to launch a Velocity Aerialist on helium balloon rig over a stadium 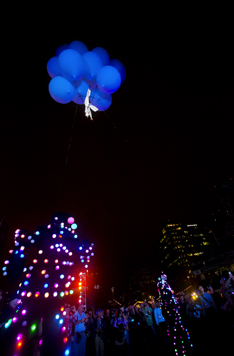 Posted by Gregangelo & Velocity Arts & Entertainment at 9:24 PM No comments: