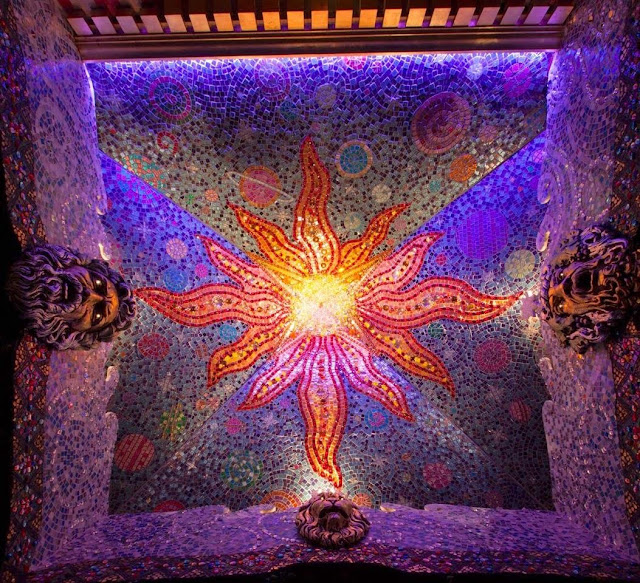 Today’s guests who journeyed through the Portico Portals of the Museum were a mother and her 10 year old boy named Jahari . He has extreme autism and tourette's compounded with several other Disabilities. By the end of the experience, I was inspired to rename his so called disabilities-
Omni-abilities ‘ . The boy rocked .
On entry to the Portico, his hat was pulled over his eyes, and he was bluntly exclaiming “ I don’t care about any of this, For Christ sake Just open the fuckin door and let me in , This room is shit”. (This kid is speaking a language I get- intentionally testing me, with 0 filters ) Over the next magical 3.5 hours , I let him lead the experience at his own pace and interest through all 27 differing realms. He awakened and communicated clearly , even laughed more and more as he progressed through each portal - and so did I! 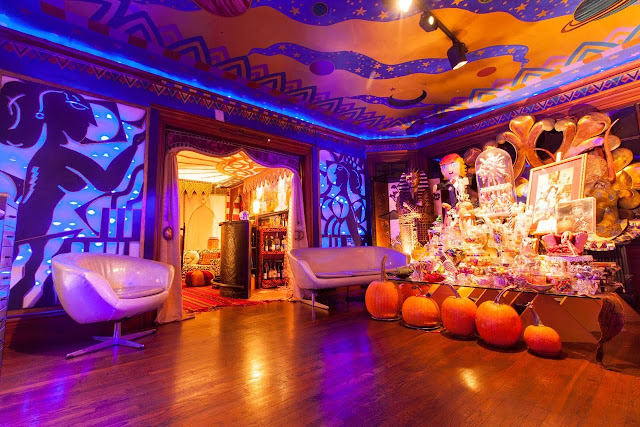 On view of the Candid Civilization install in The Eclipse Room, he shouted 'Even Hitler thinks Trump is an ass!' 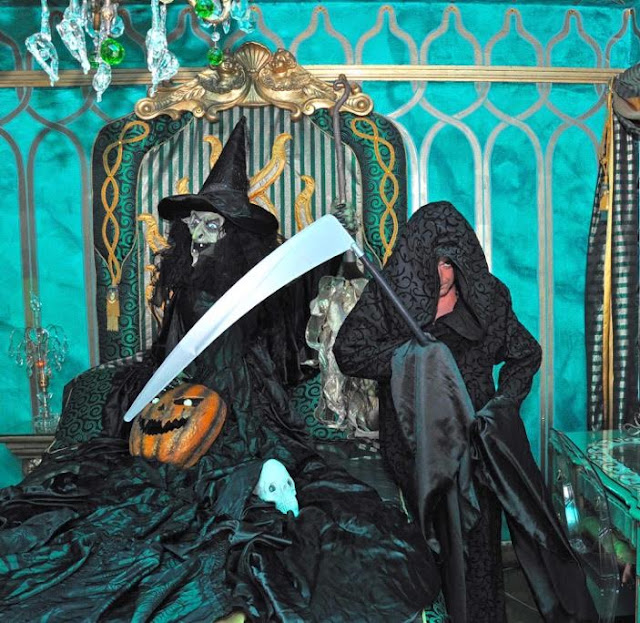 In The Green Room, bursting with life, after my explanation of some lesser known astrophysics, he looked me in the eye and said :
‘I'm not here to fuck spiders, mate’
( an Australian colloquialism which apparently means - Obviously Yes) .
He repeatedly told me , ‘I want to die’, to which I assured him he would, eventually -just not today ,

(except figuratively in The Death Chamber). So he set his death date for 2086 . Reasonable . 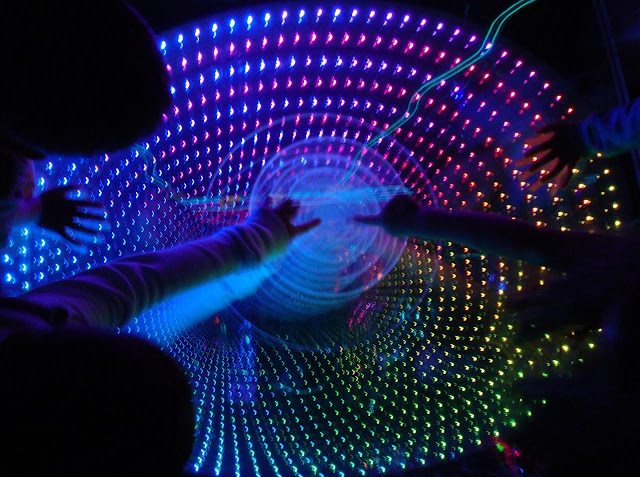 Between all of his blunt , yet poignant profanities , ticks , and reactions , was a boy with profound revelations , intelligence bordering on genius, a virtual living internet .
Humanity can certainly learn to love, accept, nurture and listen to what we so quickly label ‘disabled’. Many of us have the ability to somehow, within our own means, take better care of those who may not be so quickly ‘able’ to make decisions according to the limitations of the status quo. 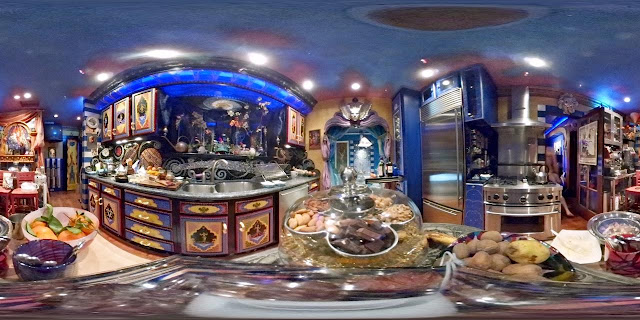 Jahari’s single working mom, aided by the State to take care of her son, genuinely insisted on paying the full price / minimum 4 guests for the experience here, which profoundly connects guests through the arts .

Meanwhile, we spend many of our days as artists haggling with self proclaimed ‘ billionaires ‘ who insist what a ‘great opportunity’ it would be for us to donate our artistry to them for free, and at our own expense.

Who truly contributes meaningful riches to this world ?


While riding this cable car, the all-to-familiar ingrained scent of the burning wood brakes on steel immediately unleashed an explosion of memories from this hill - Nob Hill.From childhood memories of playing at the Mark Hopkins and ordering room service for dinner with a class mate whose parents managed the iconic hotel , To sneaking in the Venetian Room at The Fairmont late at night to play the well maintained piano and put on shows for my friends, to truly being exposed to the diversity and grit of humanity - It all started here. 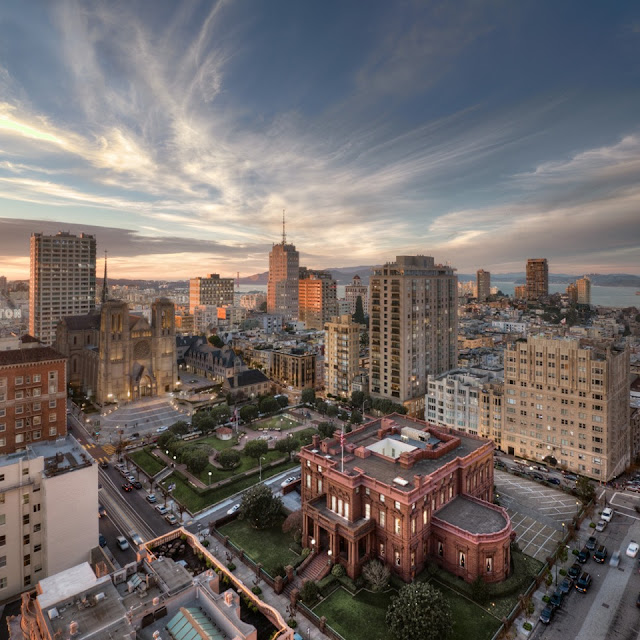 As a genuine native San Franciscan , Powell St is one of the hills I grew up on.I went to school from K-8 here on this hill , Learned how to skate down and up this hill (still do), had my first job as a teenager in the arts at a contemporary gallery on this hill , honed my work skills at a cafe/catering co which serviced the suits in the financial district, and performed my first show at a super club near the base of this hill. 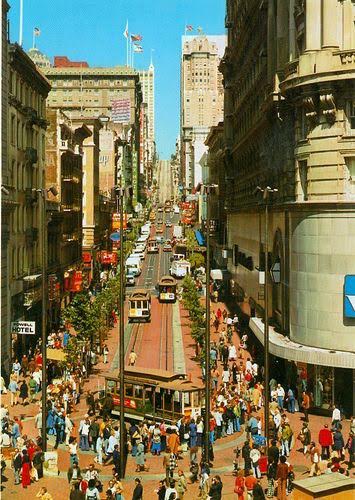 I have vivid  memories of me, brother, sisters and friends as small unsupervised children helping the charismatic Cable Car drivers to push the cable cars around at the end -of-the-line turnstile and than waiting for them to roll away only to chase after them and jump on board while in motion on the way up the hill to school.

We used to frequent the ‘Woolworths’ in the Flood Building . It was a magical place where you could watch glass blowers , printers , and other crafts people making their wares for sale . You could buy gold fish off a shelf or glazed donuts at the breakfast counter . We were not too interested in the basement linen dept. 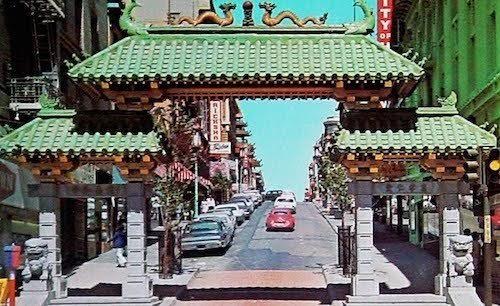 As kids, our school ‘NDV’ was rite next to the gates of Chinatown. We would explore the streets and alleys of old SF China Town , buy edible rice paper covered candies and trinkets, look into the windows at apothecary shops which displayed pickled snakes and other Chinese medicinal herbs, tinctures, and other anomalies. 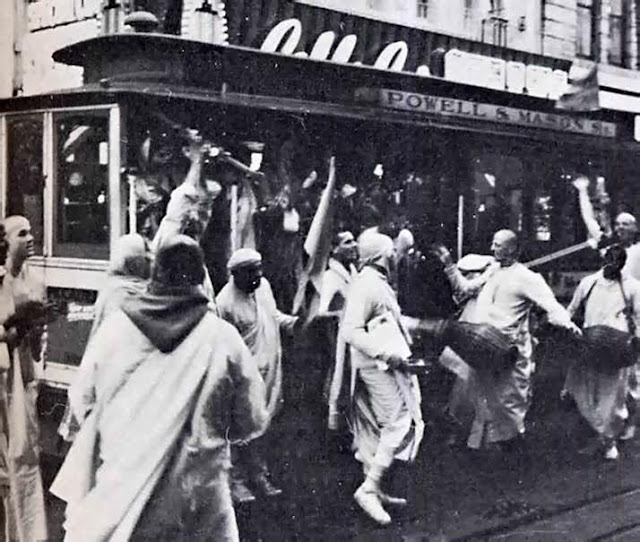 Homeless people, mentally ill, and cults were always present in the streets of the city and very much part of our daily navigations and awareness. They were so present that as kids, we even assigned names to them. A few of the many individuals who stand out are : The ‘Burn Lady’ who would scream in agony on one of the bus lines as if she were on fire. She said she was victim to an inferno, but there were no burns on her. There was the ‘Gamma Ray’ lady who would wear a blond beehive wig that must have been five 5 high and she would tell all of us kids that her husband was an astronaut and was shooting toxic gamma-rays into her brain from outer space and the wig was to protect her. There was the ‘no name’ guy who would publicly masturbate on the street cars. I remember my mom wisely and casually telling us to let the girls sit on the outside seats so that they could get away from him quickly.

And than there were the cults publicly recruiting in the streets. There were The Moonies, The Church of Satan , and the one we would encounter on Powell St every day- The Hare Krishnas. We would approach them often and buy strawberry incense ( I still remember that sweet smokey smell) and flowers from their street kiosks.

We saw their transparency and basically battled all of these characters with our childish senses of humor and opposing morals installed into us by our parents, who also gave us freedom. We never succumbed, and we were never molested in any way. It was through this worldly exposure that by the ripe age of 7, we were already liberated and self-realized enough to stay on our own paths and together remain safe.


Looking back, ultimately we learned compassion and acceptance. 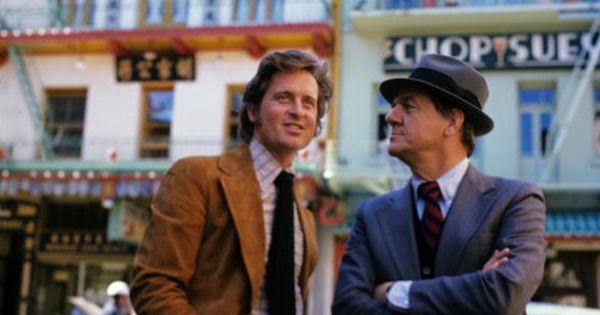 Show at the time staring Michael Douglas and Karl Malden. The City was very violent at the time. There were drug lords who invaded after the Summer of Love, gang warfare in Chinatown, we had sniper drills at our school, the Zodiac  , Zebra and Trailside serial killers were on the loose in the city, the Jonestown Guyana incident occurred , the Patty Hearst /Symbionese Liberation Army saga was playing out, and the George Moscone/ Harvey Milk murders occurred. This hit particularly close to home as the Moscone family kids and our clan of young friends were all classmates and close family friends. Nevertheless, as kids we all navigated together, and unsupervised, through the streets of San Francisco with savy, intuition and street smarts. 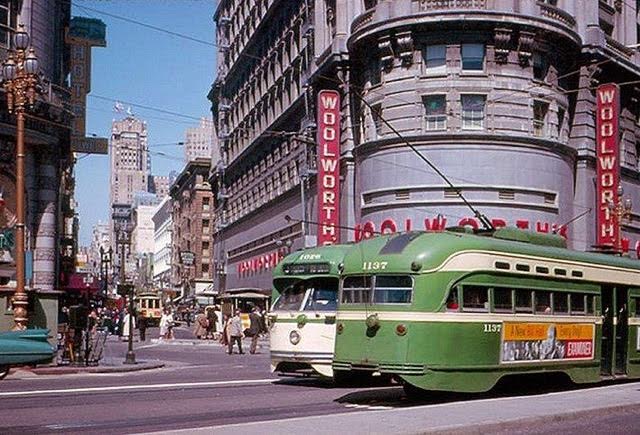 One day I was with a group of kids on the Market St streetcar which was held up by a rooftop sniper a block ahead of us. We got off, went to a payphone and called my friend’s dad with the grim news. He simply said  “Don’t worry, we’ll save you dinner”. We got home safe. He knew that our intuition was keen and that, though young,  together we made choices which protected us from harm. 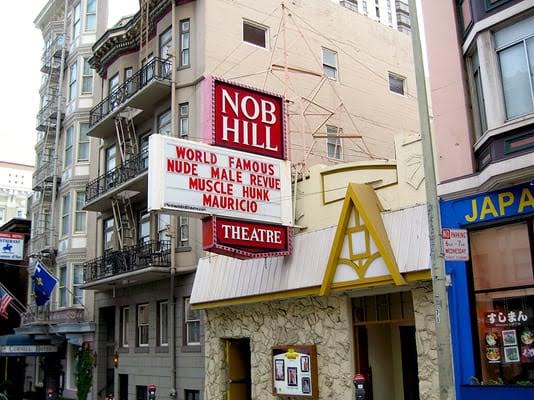 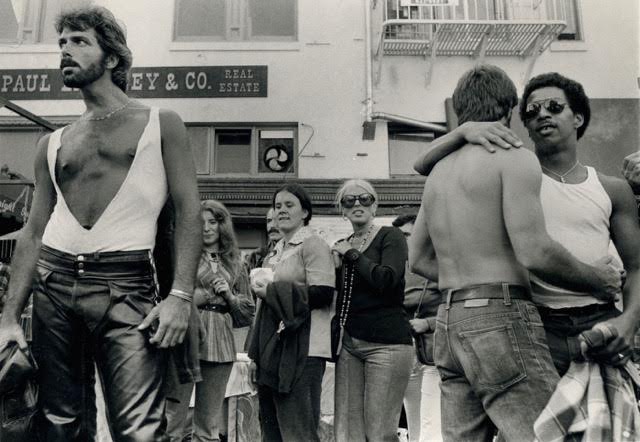 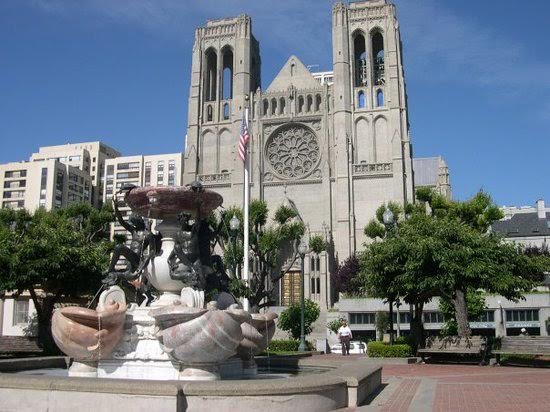 My Lebanese mother lived on this hill till the end of her life. During the plight of the SF AIDS epidemic , a human crisis ignored by our USA government , she left her Nob Hill apartment sometimes 5 nights a week to go down the hill to the seedy Polk Street as part of a local outreach program that helped educate and guide male prostitutes to engage in safe sex and for drug users to adhere to clean needle practices in the streets. This awareness helped stop the spread of the deadly virus, which wiped out so many of our friends, relatives and loved ones. She was an at-face cantankerous, yet Just woman, with a mixture of conservative and very liberated and accepting ideals. 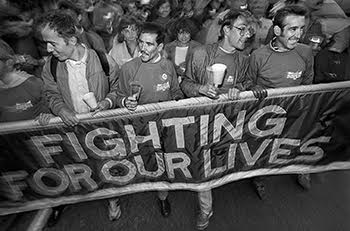 One day, I remember approaching her apartment which was just above a public courtyard on the California Street Cable Car line across from Grace Cathedral. She was in the window table training a few ladies how to put condoms on a  banana with their mouths- a practice she employed to train the male street prostitutes to protect them from their often violent and careless ‘Johns’ who she said were typically well-to-do suburban and financial district men. (*I jokingly noted that, though a noble cause, she might consider demonstrating away from public view)


I also learned first hand the truth of this demography while I was working entertaining interactively face-to-face at corporate events before the digital age of sex apps. Conventioneers away from their wives and families would always approach me (regardless of what ridiculous or sacred costume I may be wearing) and ask first off "Where can I find sex in SF?”. I’d always offer up more profound conversation which proved to engage. To this day , decades later , event planners and organizers have 0 idea of who their guests actually are and continue to insist how conservative they are. I’m still in the field and know the truth. Archaeologists in ancient cities find underground tunnels that secretly lead from noble libraries into a rowdy brothels. Nothing has changed. 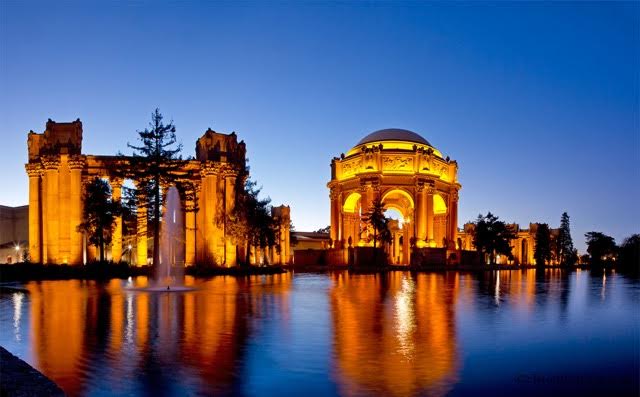 I am so grateful to make a life in this hilly city as an artist who also employs and motivates so many other artists of varying mediums, international cultures, and inspirations. We all contribute as we earn, bring beauty & kindness where there was once bleakness & indoctrination, and share our dreams & laughter with those who may have veered off their path and lost them. In SF, you can get it back. 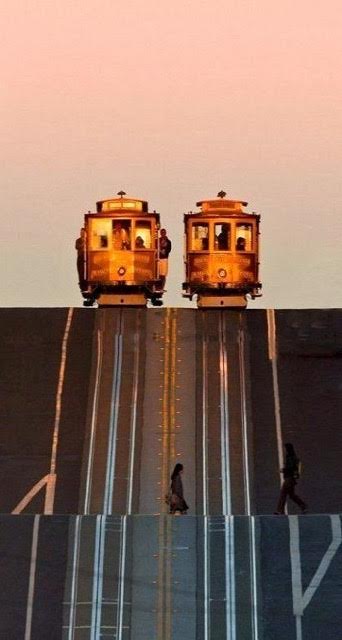 I don’t recall ever seeing any expanse of flat ground till I was 6 or 7 years old and it seemed so strange. Still does.


The smell of the burning wood brakes on steel of the Cable Cars mixed with the pungent aroma of pot, and the sweet scent of Candy being crafted by Confectioners at ‘Judy’s’ on Powell Street are the prominent urban smells of home to me.
It was a different time and I am grateful to have grown up with such independence that gave us keen realizations of both the grit and splendors of life. We were not sheltered , never felt fear of the unknown, intuitively new when to run or stay , and were confronted by a range of life lessons. Ultimately we lived and thrived in the comfort and love of our SF family homes in the hilly , friendly, and sometimes dangerous neighborhoods. The San Franciscans I speak of have all grown to be genuine and individual people who contribute to the world in their own way.

And my brother’s response to this post:
Great memories!

We used to designate one person to race the cable car up this hills, starting on Sutter. After some prodding the cable car operators would let me ring the bell, some of them were very good at ringing out complex rhythms...

The best thing about wearing a school uniform that was a sailor suit... It was the perfect disguise for drinking and smoking out in public (+ the chicks dug them). I got in trouble for smoking in front of the Chez Paris strip club on Mason St…

*The reality of living as an urban youth in SF in the 70’s
There were no ‘Helicopter’ parents in our periphery- but we knew they were there!